Description: Scrum can assist you in creating software or it can stand in your way. Please choose wisely.
Publish Date: 12/29/2017
Keywords: Scrum Sdlc Agile Software Development Life Cycle
Scrum is a popular ever evolving practice composed of structured meetings, artifacts, and a time box. It is a non-technical framework for important communication that is much needed between the business (non-technical stakeholders) and the developers. As the originators claim, it’s easy to understand but difficult to master…And it needs to die in a fire.

One problem with scrum is that it doesn’t actually contain the mind numbing technical details of how to create software any more than this new process I invented for creating dishes for your restaurant. 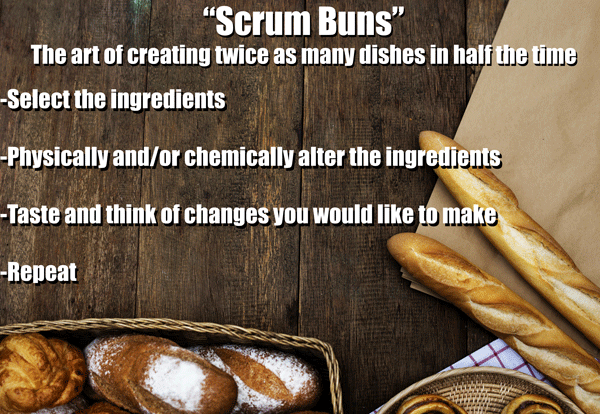 Isn’t that ingenious how I captured the entire discipline of cooking with ‘Physically and/or chemically alter the ingredients’? Should I offer seminars and certifications for how to manage a kitchen or restaurant? Evidently the software community (or at least the project management community) thinks these over simplifications are useful, and they call them “Agile Frameworks”.

At best, scrum is way to facilitate communication using meetings and to give non technical stake holders more visibility into a technical field with a high barrier of entry using simplified artifacts. At worst it provides inaccurate abstractions that management thrashes over in hopes of gaining control over a thing they fundamentally don’t understand. When presented with any non trivial aspect of creating software, the ignorant apply more scrum as if another meeting or ‘scrum of scrums’ every day actually removes technical impediments instead of creating more impedance to getting real work done. Perhaps one of the worst aspects of scrum is that organizations prioritize time spent on perfecting scrum over refining their products and core values because they think that doing scrum equals doing software.

The reason that scrum is what you do when you don’t know what is being done is because software is difficult to create and organizations are desperate for the means to stay competitive in the cheapest and easiest way possible. It is not easy or cheap to master the creation of software. But there is this scrum thing that can qualify you to run a software team as scrum master in only days of training. Hallelujah! Even organizations that have been creating software for a long time are attracted to consultant power points promising more efficiency and control without any actual research. 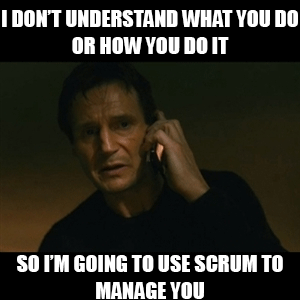 Let’s pick apart some scrum components for their best and worst characteristics: 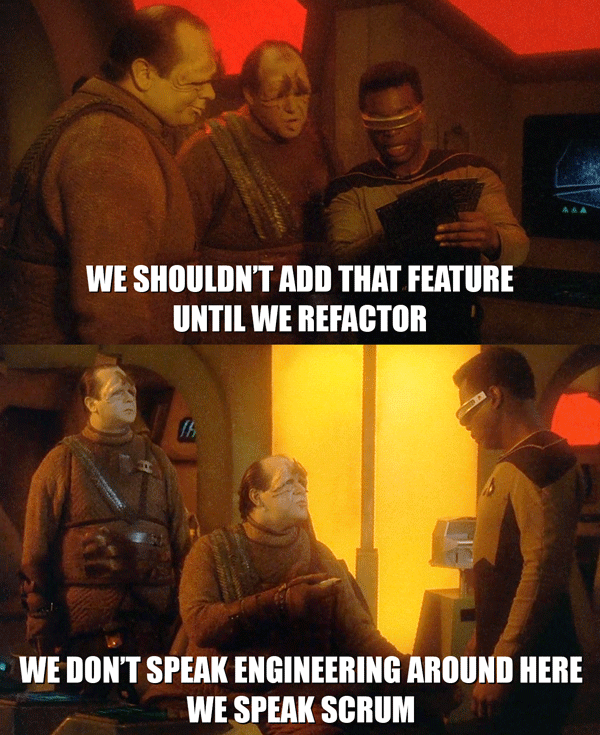 Ah ha you say! You are not describing scrum because ‘no true scrum process does [blah blah blah]’, and I might even agree, but there is no true Scotsman , nobody is ‘ doing true scrum’ and that is part of the problem. It doesn’t help you understand how to measure reality, it helps you measure oversimplified inaccurate abstractions.

Scrum is difficult to master because it requires the same skills you need to create software and ‘some meetings, artifacts, and a time box’ is barely a fraction of what it takes. It is a thing that successful organizations transcend and failed organizations fall upon like a sword.

In all fairness, scrum has the best of intentions and isn't a terrible thing unto itself. It is simply being misapplied as the silver bullet that solves for a fundamentally non-predictive, creative, and discovery oriented endeavor being immune to top down scientific theory x management. As long as organizations value control and predictability over innovation and empirical product metrics, long live scrum!
Comments: 0
© Chadwick 2021